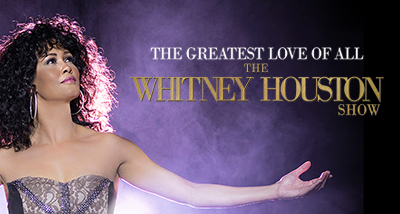 Showtime Australia’s acclaimed music production “The Greatest Love of All: The Whitney Houston Show” starring Belinda Davids will make its Omaha debut at the Orpheum Theater on Thursday, August 9, 2018 at 8:00 PM. Tickets will go on sale Friday, March 16 at 10 AM.

Tickets start at $29.25 and are available at TicketOmaha.com, in person at the Ticket Omaha* Box Office inside the Holland Performing Arts Center, 1200 Douglas Street, or by calling (402) 345-0606.

A five-piece band, backing vocalist and choreographed dancers will accompany Davids on stage as she pays tribute to Houston with live performances of the legendary performer’s biggest hits including “I Wanna Dance With Somebody,” “How Will I Know,” “I Have Nothing,” “Didn’t We Almost Have it All,” “One Moment in Time,” “Queen of the Night” and 15 other chart-topping hits.

Belinda Davids’ lauded performance on Fox TV’s “Showtime at the Apollo” Christmas Special in December 2017, where her spine-tingling rendition of “I Will Always Love You” – on the very stage where Whitney Houston filmed her famous Greatest Love of All film clip, not only earned her the awe of host Steve Harvey and an enthusiastic ovation from the live audience, but more than 10 million views of the performance video on Facebook in the days following.

Showtime Australia’s international production house, led by respected long-time father and son team Johnny and Jono Van Grinsven, in the roles of Producer and Technical Director respectively, has put together custom-designed lighting, theatrical effects, and more than 20 different hand-crafted costumes to complete the sensory spectacle and keep audiences enthralled through the course of the two-hour show.

Though this is Davids’ first major US tour as the principal of “The Greatest Love of All: The Whitney Houston Show,” she’s no stranger to American audiences, having toured extensively as a backing vocalist for the likes of Keri Hilson, Keyshia Cole and Monica in earlier years. Audiences across Europe, the UK, Middle East, Asia, Australia, New Zealand and Davids’ home country of South Africa have already been wowed by the production, which has been touring since 2013.


*Ticket Omaha is the official retail ticket outlet for all performances at the Orpheum Theater and the Holland Performing Arts Center. Tickets purchased from other ticket retailers such as secondary ticket agencies or brokers may be more expensive and may not be valid. Due to the nature of live entertainment, all programs, performers, prices, dates and times are subject to change.