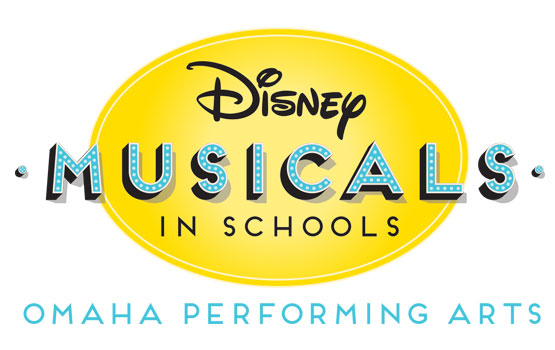 Selected schools will receive free performance rights, materials and in-school support from a team of Omaha Performing Arts teaching artists who will guide teachers throughout the rehearsal process. Over the course of 17 weeks, participating teachers will have the opportunity to learn how to produce, direct, choreograph, and music direct their first school show in an afterschool setting. The program will culminate in a 30-minute Disney KIDS musical at each school site. As a capstone to the experience, Omaha Performing Arts will host a Student Share Celebration in which each school performs one number from their show on Omaha Performing Arts’ Holland stage.

Omaha Performing Arts President Joan Squires said: "We’re happy our long and successful history with our friends at Disney Theatrical Productions and The Walt Disney Company created an opportunity for Omaha Performing Arts to implement this wonderful program. Through Disney’s generosity and their vision, we can bring live performances to the community and enrich students as well as their families. The magic of this program will resonate for years to come."

“This program has been instrumental in helping expand Omaha Performing Arts’ education and community engagement programs.  We are proud to continue this important partnership with Disney,” said Laura Kendall, Vice President for Programming and Education.

Public elementary schools in Omaha, Council Bluffs and surrounding communities are invited to apply. The deadline for applications is May 9, 2018. To request an application or request more information contact DMIS@OmahaPerformingArts.org. Schools can also contact Kathleen Lawler Hustead, Omaha Performing Arts Education Manager, at 402.661.8446 or khustead@omahaperformingarts.org with questions.

Disney Musicals in Schools was launched in New York City in 2010 in response to Disney Theatrical Production’s concern that under-resourced public elementary schools were not afforded equitable access to the arts. After successfully offering the program in New York City schools, Disney Theatrical Productions began partnering with organizations in other communities across the United States.

Disney KIDS musicals, created in partnership with Music Theater International (MTI), are 30-minute musicals designed for elementary school performers and have been adapted from the classic Disney films 101 Dalmatians, Aladdin, The Aristocats, Cinderella, The Jungle Book, The Lion King, and Winnie the Pooh.

We are grateful for support from the Nebraska Arts Council, Nebraska Cultural Endowment, and National Endowment for the Arts, the City of Omaha and Douglas County. We also rely on corporate sponsors, donors and foundations.


DISNEY THEATRICAL PRODUCTIONS (DTP) operates under the direction of Thomas Schumacher and is among the world’s most successful commercial theatre enterprises, bringing live entertainment events to a global annual audience of more than 20 million people in more than 50 countries.  Under the Disney Theatrical Productions banner, the group produces and licenses Broadway productions around the world, including Beauty and the Beast, The Lion King, Elton John & Tim Rice’s Aida, TARZAN®, Mary Poppins, a co-production with Cameron Mackintosh, The Little Mermaid, Peter and the Starcatcher, Newsies, Aladdin, and Frozen.  Other successful stage musical ventures have included the Olivier-nominated London hit Shakespeare in Love, stage productions of Disney’s High School Musical, Der Glöckner Von Notre Dame in Berlin, and King David in concert.  DTP has collaborated with the country’s leading regional theatres to develop new stage titles including The Jungle Book, The Hunchback of Notre Dame and Freaky Friday.

Disney Theatrical Productions also delivers live shows globally through its license to Feld Entertainment, producer of Disney on Ice and Disney Live!  For over 30 years, Disney on Ice and Disney Live! have brought beloved Disney stories and characters annually to over 12 million guests in nearly 50 countries worldwide, through productions such as Marvel Universe Live! and Frozen, the most well attended and highest grossing Disney on Ice production to date.  In addition, DTP licenses musical titles for local, school and community theatre productions through Music Theatre International, including The Lion King Experience, a unique holistic arts education program wherein accredited elementary and middle schools produce condensed, age-appropriate JR. and KIDS adaptations of The Lion King.

ABOUT MUSIC THEATRE INTERNATIONAL
Music Theatre International (MTI) is one of the world's leading theatrical licensing agencies, granting theatres from around the world the rights to perform the greatest selection of musicals from Broadway and beyond. Founded in 1952 by composer, Frank Loesser, and orchestrator, Don Walker, MTI is a driving force in advancing musical theatre as a vibrant and engaging art form. MTI works directly with the composers, lyricists and book writers of these musicals to provide official scripts, musical materials and dynamic theatrical resources to over 70,000 professional, community and school theatres in the US and in over 60 countries worldwide. MTI is particularly dedicated to educational theatre, and has created special collections to meet the needs of various types of performers and audiences. MTI’s Broadway Junior shows are 30- and 60-minute musicals for elementary and middle school-aged performers, while MTI’s School Editions are musicals annotated for performance by high school students. www.mtishows.com