Jazz on the Green continues with The Big Takeover at Turner Park Thursday, July 12, 2018 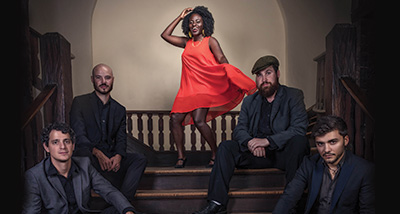 Omaha Performing Arts presents a fresh take on reggae music when The Big Takeover comes to Jazz on the Green Thursday, July 12, 2018. Centered on the vocal stylings of Jamaican-born NeeNee Rushie, the band blends traditional and experimental Jamaican pop sounds, world music and the soulful energy of Motown.

In New York’s musically hopping Mid-Hudson Valley, they are the only band around welcomed and honored at all the major national-circuit rooms: the indie/experimental haven of BSP in Kingston, the jazz and blues gem that is the Falcon in Marlboro, the classic rock mecca of the Bearsville Theater in Woodstock. The Big Takeover packs them all. On the road, the band has played over 500 shows, sharing stages with The Original Wailers, Jefferson Starship, Eek-a-Mouse, the Slackers and more.

The lead sponsor for Omaha Performing Arts presents Jazz on the Green at Midtown Crossing is Mutual of Omaha. Media sponsors for this year’s series are KETV, KIOS and Omaha World-Herald. For more information about the series and the artists, visit JazzOnTheGreenOmaha.com.

There are two parking garages, easily accessible from Farnam Street, Harney Street, Dodge Street and 33rd Street. For Jazz on the Green event days only, garage parking is free from 5-11PM.

Mutual of Omaha will have its surface parking lots open to the public for free beginning at 5 PM. Mutual of Omaha’s surface lots are located at 36th and Dodge streets; between 35th Avenue and 34th Street off of Dodge; and at 35th and Farnam streets.

Metered parking is also available on the street.