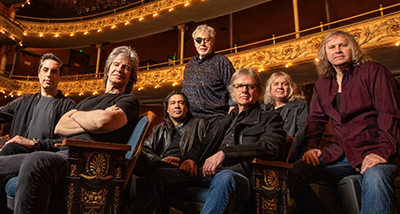 SEXTUPLE-PLATINUM ALBUM TO BE PERFORMED IN ITS ENTIRETY
SATURDAY, OCTOBER 5, 2019 ORPHEUM THEATER

America’s preeminent progressive rock band, KANSAS, will be touring select cities in the United States and Canada in during the fall and winter, on the third leg of their popular Point of Know Return Anniversary Tour. Launched as a celebration of the 40th Anniversary of the massive hit album Point of Know Return, the band will be performing the album in its entirety. The tour showcases more than two hours of classic KANSAS music including hit songs, deep cuts, and fan favorites.

KANSAS comes to Omaha’s Orpheum Theater at 7:30 PM Saturday, October 5, 2019. Tickets and KANSAS VIP Packages go on sale to the general public at 10:00 AM Friday, April 12, 2019. Tickets are available at TicketOmaha.com, in person at the Ticket Omaha* Box Office located at the Holland Performing Arts Center, 1200 Douglas St. or by calling (402) 345-0606. More tour ticket information can also be found at www.kansasband.com.

In 1977, KANSAS followed up the success of Leftoverture by releasing the album Point of Know Return.  Containing the smash hit and million-selling single “Dust in the Wind,” along with fan favorites such as “Portrait (He Knew),” “Closet Chronicles,” and “Paradox,” Point of Know Return became the band’s greatest selling studio album. The album peaked at #4 on Billboard’s Album charts, reached sextuple-platinum status with more than six million copies sold, and had three Billboard Hot 100 singles.

“The sentiments for this anniversary tour for Point of Know Return are kind of similar to the release of the album itself,” comments KANSAS drummer and original member, Phil Ehart. “Just like when we first released the album, as a band, we knew we had to deliver a tour just as good, or better, than what we did for Leftoverture. So, that’s what we’ve tried to do. Fan response has been overwhelmingly positive and we are excited to continue it and take this show to more people.”

Throughout the tour, live shows not only culminate with the album Point of Know Return performed in its entirety, but KANSAS also performs classic hits, deep cuts, and fan favorites.  In some cases the band even puts a new spin on a KANSAS classic.  The more than two-hour KANSAS musical event has songs for every type of KANSAS fan.

KANSAS violinist David Ragsdale adds, “This tour really is so much fun. As engrained as this album is in popular culture with ‘Dust in the Wind’, the song ‘Point of Know Return,’ and the album artwork, it’s not uncommon for people to overlook the incredible depth of the album. This entire set keeps the band on our toes and is hopefully as fun for the audience as it is for us!”
KANSAS is currently comprised of original drummer Phil Ehart, bassist/vocalist Billy Greer, vocalist/keyboardist Ronnie Platt, violinist/guitarist David Ragsdale, keyboardist Tom Brislin, guitarist Zak Rizvi, and original guitarist Richard Williams. Originally formed in 1973 in Topeka, KS, the band’s documentary film KANSAS: Miracles Out of Nowhere is currently being broadcast on AXSTV.  KANSAS has released 15 studio albums, including its most recent release The Prelude Implicit (2016), and plans to release of another new studio album in 2020.  With no signs of slowing down, KANSAS continues to ‘carry on;’ performing in front of large and enthusiastic audiences around the world.

For more information on KANSAS and the Point of Know Return Anniversary Tour, please visit: