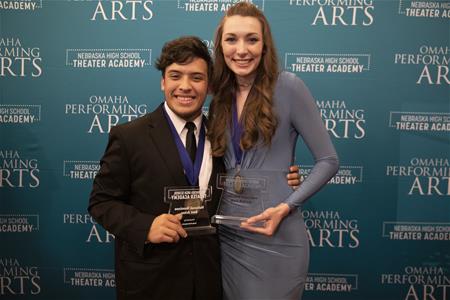 Piper Monson of Nebraska City and Drew Sinnard of Kearney will represent Nebraska at The Jimmy Awards in New York later this month.

Finalists will compete on Broadway

The Jimmy® Awards/The National High School Musical Theatre Awards™ (NHSMTA) program impacts more than 100,000 students who participate in high school musical theatre competitions sponsored by presenters of Touring Broadway productions throughout the United States. Presented by the Broadway League Foundation, the program sends a Best Actress and Best Actor winner from each of these competitions to New York for a week-long theatre intensive of coaching and rehearsals with industry professionals in preparation for a one-night-only talent showcase on Broadway.

The eleventh annual National High School Musical Theatre Awards, known in the Broadway industry as The Jimmy Awards® and presented by The Broadway League, will be hosted by Tony Award® - winning actor Ben Platt will be held Monday, June 24, 2019 at 7:30 PM at the Minskoff Theatre on Broadway in Manhattan.

Now in its sixth year, the Nebraska High School Theater Academy program has expanded to include more than 80 high and middle schools across Nebraska with more than 8,000 students participating this year. Registration for the 2019-2020 school year opens online at NebraskaHSTA.org in August 2018.