Jazz on the Green kicks off Thursday, July 11, 2019 at Midtown Crossing 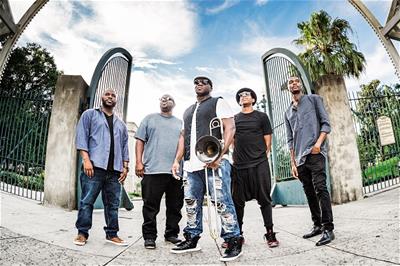 Front man “Big Sam” Williams has more than two decades of music experience, playing with the Dirty Dozen Brass Band and backing up the Dave Matthews Band. With Funky Nation, he’s released five albums and together the band boasts jaw-dropping talent and uncontainable energy. The headliner takes the Turner Park stage at 7:30 PM.

All Jazz on the Green at Midtown Crossing concerts are free to the public, with no reservations or tickets needed. Seating in the grassy circular area of Turner Park with a direct view of the stage, is permitted at 5:00 PM. Green spaces outside the bowl will be available before 5:00 PM. Concertgoers are encouraged to enter Turner Park via Farnam Court, 32nd and Farnam, across from Alamo Drafthouse Cinema.

This year’s Jazz on the Green at Midtown Crossing includes:

Thursday, July 25
PAA KOW AND HIS AFRO-FUSION ORCHESTRA
(internationally recognized as one of the top drum players in Africa)

Thursday, August 8
MARCOS & SABOR
(an Omaha favorite back on his hometown stage with dance-worthy Latin jazz)

Thursday, August 15
DARCY MALONE AND THE TANGLE
(a night of soul led by a powerhouse singer)

The lead sponsor for Omaha Performing Arts presents Jazz on the Green at Midtown Crossing is Mutual of Omaha. Media sponsors for this year’s series are KETV, KIOS and Omaha World-Herald. The sponsor of this performance is Beardmore Subaru. For more information about the series and the artists, visit JazzOnTheGreenOmaha.com.

There are two parking garages, easily accessible from Farnam Street, Harney Street, Dodge Street and 33rd Street. For Jazz on the Green event days only, garage parking is free from 5-11PM. Mutual of Omaha will have its surface parking lots open to the public for free beginning at 5 PM. Mutual of Omaha’s surface lots are located at 36th and Dodge streets; between 35th Avenue and 34th Street off of Dodge; and at 35th and Farnam streets. Metered parking is also available on the street.