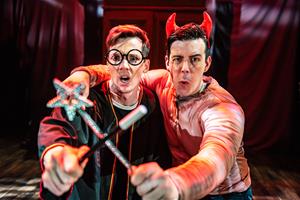 Tickets starting at $45 are available at TicketOmaha.com, in person at the Ticket Omaha* Box Office located inside the Holland Performing Arts Center, 1200 Douglas Street, or by calling (402) 345-0606.

Playing to sold out houses all over the world, the Olivier Award-nominated Potted Potter – The Unauthorized Harry Experience – A Parody by Dan and Jeff takes on the ultimate challenge of condensing all seven Harry Potter books (and a real-life game of Quidditch) into 70 hilarious minutes. Even if you don’t know the difference between a Horcrux and a Hufflepuff, Potted Potter will make you roar with laughter.

Starvox Entertainment and Potted Productions first introduced the fabulously funny show to North American audiences in Toronto in 2012, where it received rave reviews. Over the past several years the show has completed multiple tours, delighting crowds with its clever wit. Potted Potter has left audiences feeling positively nostalgic and has sold out theatres across the United Kingdom, Australia, New Zealand, Singapore, Dubai, and Canada. Whether you’re team Gryffindor or don’t know the difference between a Death Eater and Dumbledore this show is a seriously good time.