The Godmother of Soul Brings Her Powerhouse Vocals to the Orpheum Theater October 18, 2019

The Godmother of Soul Brings Her Powerhouse Vocals to the
Orpheum Theater October 18, 2019 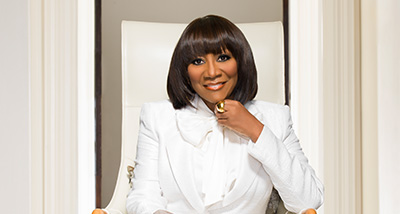 Tickets starting at $45 are available at TicketOmaha.com, in person at the Ticket Omaha* Box Office located inside the Holland Performing Arts Center, 1200 Douglas Street, or by calling (402) 345-0606. This performance is sponsored by First National Bank.

LaBelle has enjoyed one of the longest careers in contemporary music. The actress, singer and entrepreneur started her career with Patti LaBelle and the Bluebelles in the 1960s. After the group’s name change to Labelle in the 1970s, the funk trailblazers released the iconic disco hit “Lady Marmalade” and landed the cover of Rolling Stone magazine. In her career, she’s had 13 Top 10 R&B singles and earned two Grammy Awards.

Renowned for her dynamic career as an entertainer, her work as a humanitarian is just as legendary. She remains an advocate for adoption, diabetes, cancer, HIV / AIDS and many other causes and nonprofit initiatives. She has written six books, “Don’t Block the Blessings,” “LaBelle Cuisine: Recipes to Sing About,” “Patti’s Pearls,” “Patti LaBelle’s Lite Cuisine,” “Recipes for the Good Life” and her most recent, “Desserts LaBelle.” Several years ago, she introduced Patti’s Good Life, a successful product line that includes a variety of sauces, sweet potato pie, cobblers and cakes. She stars in her own highly rated cooking show, “Patti LaBelle's Place.”