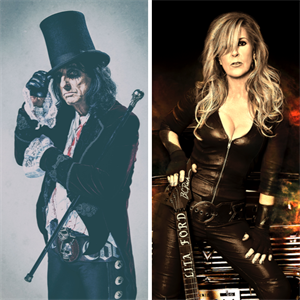 Tickets, starting at $53.25, are available at TicketOmaha.com, in person at the Ticket Omaha* Box Office located inside the Holland Performing Arts Center, 1200 Douglas Street, or by calling (402) 345-0606.

Alice Cooper pioneered a grandly theatrical brand of hard rock that was designed to shock. Drawing equally from horror movies, vaudeville, and garage rock, the group created a stage show that featured electric chairs, guillotines, fake blood and boa constrictors. He continues to tour regularly, performing shows worldwide with the dark and horror themed theatrics that he’s best known for.

With a schedule that includes six months each year on the road, Alice Cooper brings his own brand of rock psychodrama to fans both old and new. Known as the architect of shock - rock, Cooper (in both the original Alice Cooper band and as a solo artist) has rattled the cages and undermined the authority of generations of guardians of the status quo, continuing to surprise fans and exude danger at every turn, like a great horror movie.

Lita Ford’s career began in 1975 as a founding member and guitarist of the groundbreaking all female group the Runaways. The groups hard rock / punk edge spawned hits like “Cherry Bomb” and “Queens of Noise.” Lita and the Runaways proved their timelessness in 2014 when “Cherry Bomb” was featured in the critically acclaimed Marvel / Disney Studios hit movie “Guardians Of The Galaxy” and was nominated for a Grammy Award.

The year of 2018 celebrated the 30th anniversary of the self-titled multi-platinum “Lita” album. Released on February 2,1988 the “Lita” album boasted four charting hit singles. “Back to the Cave”, “Falling In and Out of Love” (co-written with Motley Crue’s Nikki Sixx) along with the world wide mega hits “Kiss me Deadly”, nominated for the MTV Video Music Awards Best Female Video of the year and the certified gold ballad single “Close my Eyes Forever” featuring Ozzy Osbourne, which remained in the Billboard top 10 for 25 weeks. The “Lita” album solidified Ford as one of the most influential female performers in the music industry and earning her the title “Queen of Metal.”