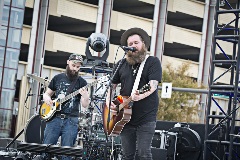 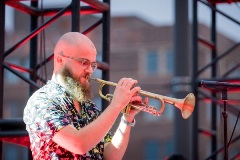 OMAHA, Neb. (March 31, 2021) – Omaha Performing Arts announces the return of outdoor live music concerts to downtown Omaha this summer with Holland Center Outdoors.  From May to October, patrons can enjoy a wide variety of entertainment featuring popular rock, country, blues and stand-up comedy performances from national touring acts and local performing artists.  The outdoor venue is located next to the Holland Performing Arts Center.  Food and drink will be available.

Iliza Shlesinger
July 22, 2021 | 7:00 PM Holland Center Outdoors | East Lawn Comedian Iliza Shlesinger is looking to add laughter to listeners’ joy bucket with her Back In Action Tour.  After canceling her tour last season due to COVID-19, Shlesinger is back in action with jokes and party goblins for fans. Shlesinger’s stand-up acts often include her life story or comical narratives about reality. She premiered her fifth Netflix stand-up special, "UnVeiled," in November 2019. The segment comically delves into her journey of getting married.

Southern Avenue
July 24, 2021 | 7:00 PM Holland Center Outdoors | East Lawn
The boundary-breaking Memphis combo Southern Avenue fuses soul, blues and R&B that reflects the band members’ diverse roots as well as their deep commitment to their southern style. The band has traveled to more than a dozen countries wowing audiences and released their second album, Keep On, in 2019. When you hear this band critics say expect, “a frothy Memphis soul stew fit to twitch your body to in ways you didn't think you could.”

The Unlikely Candidates
August 13, 2021 | 7:00 PM Holland Center Outdoors | East Lawn
Based out of Fort Worth, Texas, The Unlikely Candidates is an indie rock band formed by childhood friends Kyle Morris and Cole Male in 2008. In 2013, the band signed on with major-label Atlantic and released, Follow My Feet. In early 2016, they returned with a hooky new single in “Your Love Could Start a War,” which made a strong showing on Billboard’s Alternative Songs chart. This rock ‘n’ roll five piece includes a drummer, two guitarists, bassist, and lead vocalist, who bring an energetic and melodic sound with some grit.

Red Wanting Blue
August 19, 2021 | 7:00 PM Holland Center Outdoors | East Lawn  Red Wanting Blue is a rock ‘n’ roll band that has been touring for nearly two decades playing around 200 live shows a year. The band has had appearances on “The Late Night Show with David Letterman” to National Public Radio (NPR) and climbed all way to #3 on the Billboard Heatseekers chart. Hailed as “Midwestern rock heroes” by American Songwriter in Nashville, the band delivers an explosive performance with unforgettable melodies and infectious hooks.

The Alternate Routes
September 2, 2021 | 7:00 PM Holland Center Outdoors | East Lawn
The Alternate Routes is a rock band from Connecticut. Their song “Nothing More” propelled them to new opportunities, featured prominently in the 2014 Winter Olympics, on “NCIS,” and in partnership with TOMS shoes. Next, they released “Somewhere in America,” which earned the band a 2016 Independent Music Award. The group released a new single, “Safe Haven” – a love song that uses real-life as its backdrop. Musically and lyrically the bands repertoire reflects on modern living and evolution.

The Brooklyn based band Huntertones has performed in more than 20 countries, sharing their energetic and horn-driven music sounds. Their latest release, Passport, is a collection of songs inspired by their experiences of sharing music with people worldwide. Adding depth and contrast to their live set, Huntertones shift from a dynamic six-piece ensemble to a trio featuring saxophone, sousaphone, and beat-boxing, keeping their listeners’ eyes and ear open at every turn.

To ensure the safety of performers and patrons:  Masks are required.  Touchless bag check upon entry. Food and drinks will be available and must be consumed in seats. Only mobile ticketing and cashless transactions accepted. Outside food, drinks, blankets and chairs not permitted. For the latest details, including added performances and updated safety information, please visit the Holland Center Outdoors website.