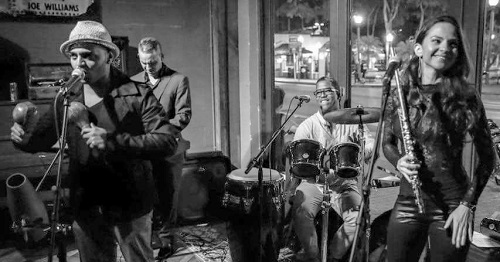 Jazz on the Green this week is going to be a HOT one – figuratively and (as always) literally. Afro-Cuban group Tiempo Libre Bohemia is turning up the heat with tropical rhythms. Our Latin jazz artists are always a favorite during the summer concert series, probably because you can’t help but to dance to the upbeat music!

Here are 3 fun facts about the band, so you can get to know them better before tomorrow tonight’s show. The park opens at 5 PM with preshow jams at 6:30 and the main act at 7:30 PM.

1. Three-time Grammy® nominee
Tiempo Libre released its debut album “Arroz con Mango” in 2005 – which was a tribute to their roots and a celebration of the members’ new life making music in the U.S.  The album earned the band its first Grammy nomination for Best Salsa/Merengue Album. They were nominated again in 2006 for “What You’ve Been Waiting For” and 2009 for “Bach in Havana”.


2. They’ve been touring for 14 years!
The band formed in Miami and 2001. Ever since, they’ve been playing to packed concert halls, festivals and jazz clubs around the world. Tiempo Libre has appeared on “The Tonight Show,” “Live from Lincoln Center,” “Dancing with the Stars” and TEDx Talks. The Bohemia concert is a more intimate performance celebrating their Cuban roots and culture.

3. So danceable!
You might want to make a mental note to bring your dancin’ shoes tomorrow night! Tiempo Libre is known for music that makes you move – they did appear on “Dancing with the Stars,” after all.  The Richmond Times Dispatch calls the band “so hot and danceable that even when you talk about the group, you find yourself moving your hips.” Please excuse me while I bust a move …