3 FUN FACTS: No BS! Brass Band at Jazz on the Green 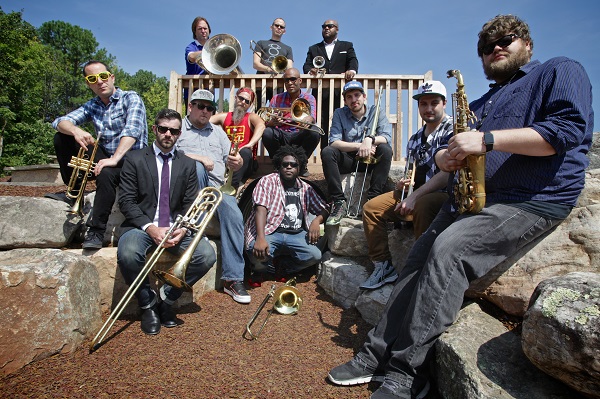 August is basically the Sunday of summer, and we plan to soak up every last minute of it. Tomorrow night we’ll be grooving during our final Jazz on the Green concert of the summer. I know, we can’t believe it’s already the last one either. But the No BS! Brass Band is serious about fun, and we can’t think of a better way to close out the season.

After the concert, be sure to meet us at Skyview Terrace at the Holland Center for an after-party. We’re keeping the rooftop bar open late and will give you 25% off if you show the bartender a picture of you jamming at Jazz on the Green.

The park at Midtown Crossing opens at 5:00 PM with preshow music starting at 6:30 and the No BS! Brass Band taking the spotlight at 7:30. Here’s a few facts about the band, so you can get to know them better before the show.

#1: They mix jazz, rock & sometimes hip-hop…
And the combination is super funky! The Richmond, Virginia-based band takes their music into uncharted territory, embracing the spirit of New Orleans into its original East Coast modern funk and fearlessly combining elements of James Brown, John Coltrane, Michael Jackson and even Led Zeppelin into their fiercely original sounds.

#2: Members are classically trained
Band founders, trombonist Reggie Pace and drummer Lance Koehler, are graduates of Virginia Commonwealth University and its conservatory program, which has a history of producing top-notch jazz musicians. When they formed the band in 2006, they were in touch with plenty of great horn players and musicians. Nearly every member of the 11-piece band has had conservatory training, holding various degrees in music. Together, they work to strip the “bs” from the music to give audiences something unique and powerful.


#3: Gave a groovin' NPR Tiny Desk Concert
NPR hosts these super fun intimate video concerts live from the desk of “All Songs Considered” host Bob Boilen. They feature stars and up-and-coming artists from across the country – including No BS! Brass Band in 2013. When they played their set, NPR wrote, “They blasted us with songs from the new album — it was so loud, you could hear the music on the other side of the building, a floor down.” I suspect tomorrow night’s concert will literally be bumpin’. As the band sings in their song “Run Around,”  “You’ve gotta show up, if you wanna get down.”

Jazz on the Green may be over for the summer, but there’s even more great jazz music headed to Omaha in our 2018/2019 Jazz Series. Learn more about it here on our website.