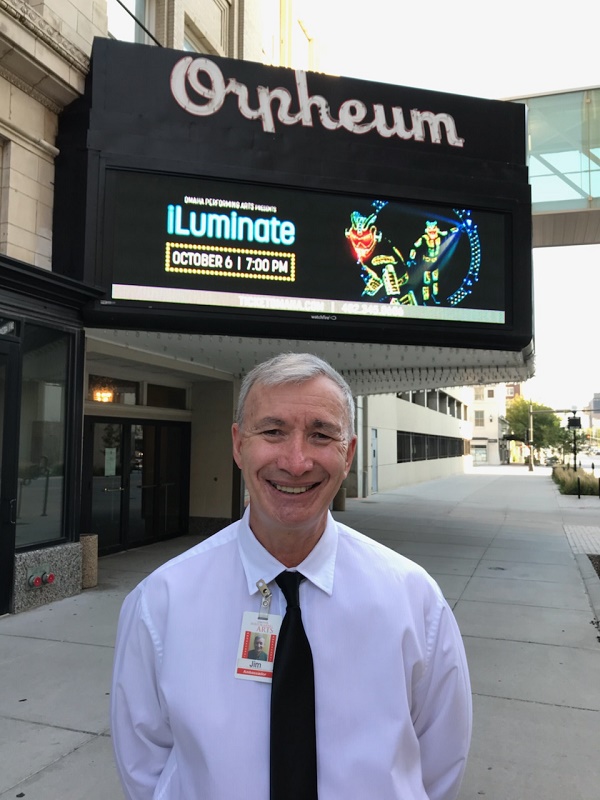 When you visit our venues, you’ll be greeted by the warm smiles of our Ambassadors.

Comprised of nearly 500 volunteers, the Ambassadors provide patrons with the friendliest service. They take tickets, help you to your seat and even snap iPhone photos for families. An Ambassador once reunited me with my iPhone after I left it in a busy bathroom. I mean, it wasn’t as though I lost track of my child – but we all know the panic that comes with losing our cellphones, am I right?

Did you know our Ambassadors work more than 46,000 hours each season – that’s a value of more than $500,000! Every season, we celebrate these fine folks at Ambassador Appreciation Night. The evening’s festivities include the presentation of our Joe Ketchmark Ambassador of the Year Award. Jim Condon took home the title this year and was applauded for his dedication to Omaha Performing Arts’ mission as well as his always-cheerful demeanor.

“I was most surprised, kind of shocked and very appreciative in being named Ambassador of the Year as there are so many well deserving ambassadors,” Condon said.

“I would be remiss in not giving a big shout out to the OPA administrative staff and employees, the service people, technicians, valet attendants, security people and all those others who work tirelessly behind the scenes making the Omaha Performing Arts the envy of many other cities.”

An Ambassador since 2015, Condon is also active as a volunteer with the Omaha Visitor Center and the Downtown Improvement District. Why does he love volunteering? Find out in his Q&A. 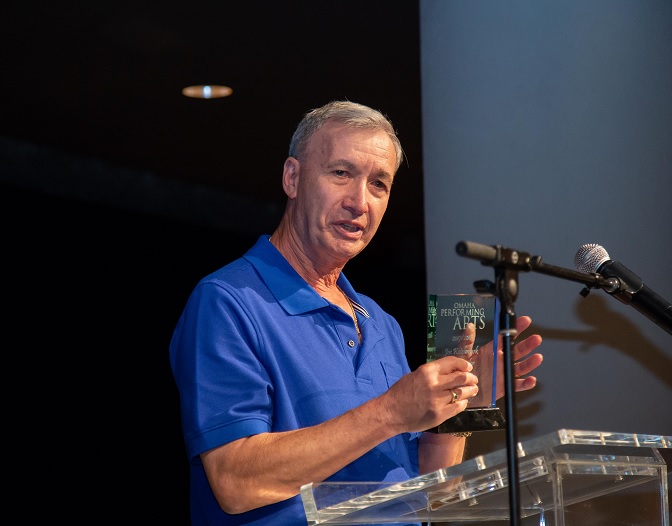 Jim Condon accepts the Joe Ketchmark Ambassador of the Year Award during Ambassador Appreciation Night at the Holland Center.

Q. Tell us a little about yourself.
Jim Condon: I am Chicago born and raised. I have been married to my wife Vicki for 30 years. I was transferred to Omaha with Union Pacific in 1978. I retired in 2014 after a 51-year career with the railroad. I’m an avid sports fan, following the fortunes of “DA Bears, DA Bulls and DA Cubs”. I refereed volleyball for 35 years with the Omaha Sports Club. I am also very active as an Ambassador with both the Omaha Visitor Center and the Downtown Improvement District.

Q. Have you always loved coming to the Holland Center and Orpheum Theater?
JC: Before becoming an Ambassador, my wife and I attended many shows at the Holland and Orpheum. A couple of my favorite shows at the Orpheum were Disney’s THE LION KING and THE PHANTOM OF THE OPERA. At the Holland, I especially enjoy the (Omaha Symphony’s) POP series. Omaha is so fortunate in having such a talented symphony orchestra.

Q. What’s something unexpected about volunteering at Omaha Performing Arts?
JC: People might not realize that being a volunteer at OPA cements many bonds of friendship and a sense of community. Becoming an ambassador opened my eyes to the multi talents, hobbies, and expanse of careers of my fellow ambassadors.