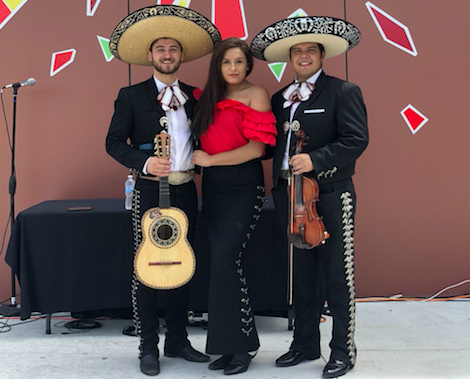 While traditions like Cinco De Mayo will be honored differently this year, that doesn’t mean communities won’t find a way to celebrate. We’re excited to share that the local band Alexis y sus Caballeros will commemorate Cinco De Mayo with a Facebook LIVE performance on Tuesday, May 5 at 12:00 PM.

Cinco de Mayo is a holiday that celebrates the date of the Mexican army’s May 5, 1862 victory over France at the Battle of Puebla during the Franco-Mexican War. While it is a relatively minor holiday in Mexico, in the United States, Cinco de Mayo has evolved into a commemoration of Mexican culture and heritage, particularly in areas with large Mexican-American populations.  The local band Alexis y sus Caballeros will share their musical talents online at O-pa to celebrate the event.

The group consists of three artists who are not only passionate about music but are also close friends.  The trio has played together for seven years and formally became a group two years ago. Their connection on stage stems from one common goal “we love sharing our passion for music and our hope is to make people smile” says Alexis Arai Robles, lead singer of the group.

The band has traveled across Mexico performing. One of their most memorable and fun performances includes being hired to perform outside a resident’s window at 2:00 AM for a birthday serenade, a common Mexican tradition for birthdays.

With this group, you can expect a fun and engaging performance. The trio will sing and play instruments like the violin, vihuela, a five string Spanish guitar and guitarron, an acoustic bass.  So, grab your lunch, a beverage and get ready to move and sing along on Tuesday, May 5 at noon with Alexis y sus Caballeros. Visit the Omaha Performing Arts Facebook page to watch their performance live.