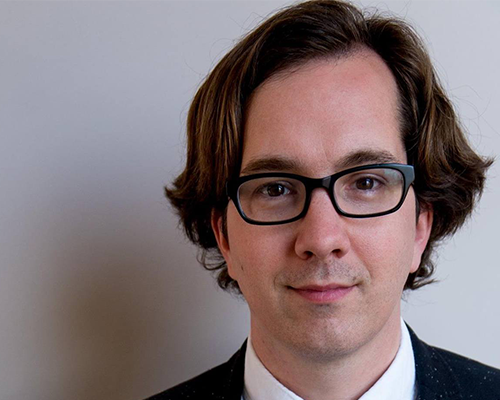 As Patron Engagement Manager at Omaha Performing Arts, I handle group sales for all O-pa shows. I love helping groups of 10 or more people organize a day trip or a night out to experience something extraordinary at the Holland Center and Orpheum Theater.

Why do I love it so much? To answer this question, I must go back to high school. Like a lot of teenagers, I didn’t know what I wanted to do with my life. I struggled to find my niche.  I also had a speech impediment. I was often shy, but I also had a knack for comedy. I could come up with funny, off-the- cuff observations in a way that contributed to class conversations without being disruptive.

One day during my junior year, I was on a roll in my European history class and one of my classmates came up to me in the hallway afterwards. He was a theater kid and he suggested that I audition for the winter play, Romeo and Juliet.

I did and was cast in several small parts. I wasn’t particularly good, but I had a blast with the whole experience. In the fall, that same classmate was directing Rosencrantz and Guildenstern Are Dead. I auditioned and he cast me in the lead role of Guildenstern.

Suddenly I had to memorize 100 plus pages of Tom Stoppard absurdist ping pong dialogue in less than a month. At first, I really struggled but I worked at it every day and by opening night I had it down cold. The shows went great but, more importantly for me, by the time the rehearsals and performances were over, my speech impediment has completely disappeared.

The Power of Live Performance

At the same time my English class was studying Death of a Salesman. There just so happened to be a national tour of that show starring Hal Holbrook coming through my hometown and our teacher organized a group outing for the entire senior class.

Even though we sat in the very back of the theater, Hal Holbrook’s performance electrified me. Watching him I knew right then and there that I wanted to be an actor. Performing in the fall play helped me overcome my speech impediment and gave me a new sense of confidence. But seeing a legend like Hal Holbrook in person sealed the deal for me. His performance changed my life.

I majored in theater in college and studied acting at a conservatory in New York City. I veered into improv and sketch comedy in my twenties and spent fifteen years of my life performing in comedy clubs and theaters in New York and Los Angeles. I lived on a cruise ship, performing with The Second City, visiting countries I would have never even dreamed of going to. I worked for Blue Man Group and even met my wife through theater (we got married on stage after one of our shows).

As I got older, I started working at theaters in ticket sales and really thrived in that role. Partly because of my love for theater and partly because of my experience performing in front of people. Eventually that led to me working here at Omaha Performing Arts.

I believe in this work so much because seeing live theater at such a crucial moment literally changed the path of my life forever. Whenever I book a school group, I imagine that there could be a kid in that group who is just like me. Someone still trying to figure out what they want to do with their life. Someone who maybe lacks a little confidence in themselves. Someone who’s life can be forever changed because of one night at the Orpheum.

Find a reason to get together. Contact James to learn more about group discounts and benefits!