NHSTA Workshop Tour takes the show on the road 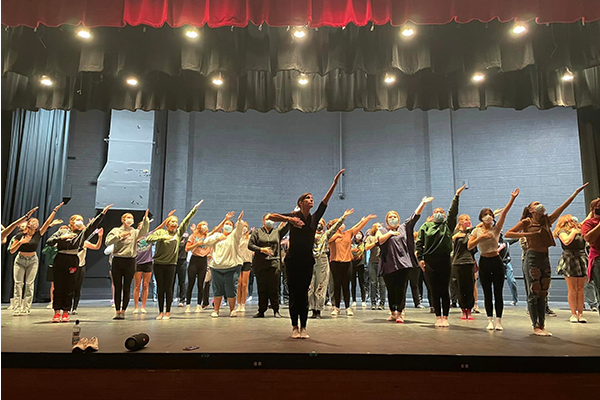 1,008 miles, 12 Nebraska schools and that’s a wrap on the 2022 Nebraska High School Theater Academy (NHSTA) workshop tour! From October 10–14, 2022, Broadway artist Elizabeth Earley and O-pa educators took a road trip across the state to share musical theater-style dance workshops from Scottsbluff to Elkhorn. Though this was the first in-person workshop tour since 2019, the tour is usually an annual opportunity for middle and high school students to participate in Broadway learning right in their hometowns.

Quoted in the Grand Island Independent, O-pa’s Education Manager Taylor Wyatt said: “It’s been great, learning about all of the high school programs that are available throughout the state, but also the community theaters and the regional theaters that are located throughout Nebraska … the different college programs … it’s really wonderful to see that theater is thriving throughout the state.”

Elizabeth Earley, who lives in New Jersey and flew into Denver to meet Taylor for the start of the road trip in Scottsbluff, described the experience as a gift. “I’m definitely seeing things I would never have otherwise seen.”

Elizabeth is both a performer and a teacher. She was Dance Captain for Hello Dolly! on Broadway, where she worked closely with Bette Midler and Bernadette Peters. She performed with Broadway’s national Mary Poppins tour and was also part of the original cast of Something Rotten! on Broadway

“I’ve been one of those people who has always felt that I felt whole when I was performing and teaching at the same time,” she said. “Teaching for me is a way to balance what you experienced as a performer – feeling like connecting the circle is happening.”

Feedback on the tour was highly positive and many local media covered the event. Christine Kier, a theater teacher at Grand Island Senior High said, “It was an incredible and real-world experience for the students.”

The Nebraska High School Theater Academy is an O-pa Education program that celebrates the power of the arts and supports high school and middle school theater programs by connecting teachers and students to learning opportunities with Broadway stars, theater, and backstage professionals. Students also receive professional feedback on school performances and additional performance opportunities. The NHSTA program is celebrating its 10th anniversary in 2023. It now reaches more than 85 schools and 9,000 Nebraska students each year.