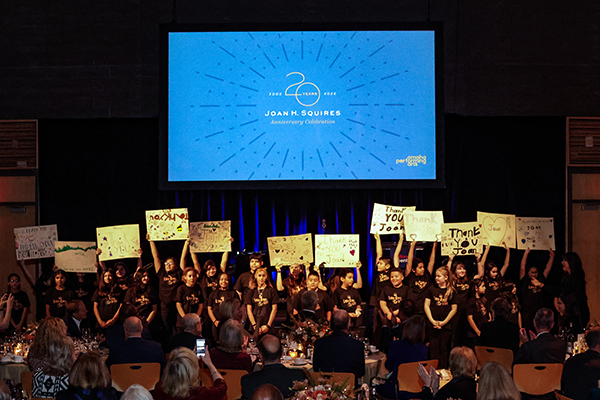 Before 2002 when the Holland Performing Arts Center was being developed, there were no award-winning touring Broadway shows, international dance companies or renowned entertainers regularly coming to Omaha. No programs providing talented Nebraska teenagers classes taught by Broadway stars. No performing arts diversity and inclusion programs that were recognized as national models.

All that changed because Joan Squires decided to move to Nebraska and accept a job opportunity with a brand-new organization. In 2022, she marks 20 years as President of Omaha Performing Arts (O-pa). 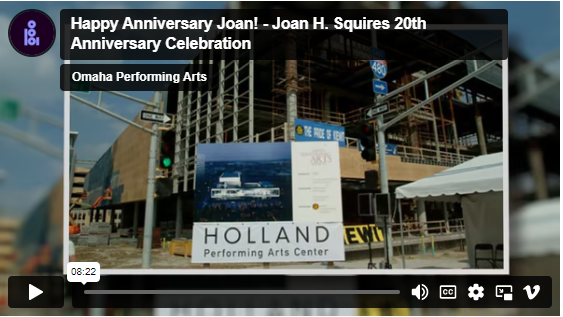 “We [Dick Holland and I] wanted to build this grand facility. We wanted to put together a real arts program for Omaha. She just dove right in,” says John Gottschalk, O-pa Board Chair Emeritus. “She had a big job to do. She endeared herself to the community, and Joan is now known and loved in this city.”

Says O-pa Board Chair Jack Koraleski, “Joan is, without a doubt, one of the best hires ever. Her commitment and passion for bringing the most amazing performances and educational opportunities to our city, and then finding ways to make them accessible to everyone has been simply transformational. Each and every year, her work impacts hundreds of thousands of people in a most positive way.”


Transformational impact for the city, state and region

Under Joan’s leadership, O-pa has grown from a start-up organization into Nebraska’s largest arts organization. Over 550,000 people now visit the Holland Performing Arts Center and Orpheum Theater annually – attending performances ranging from touring Broadway, jazz, dance, comedians and much more. Broadway blockbusters like HAMILTON, WICKED and Disney’s THE LION KING have filled the Orpheum and outstanding artists such as Wynton Marsalis, Boz Scaggs, and Wilco performed in the Holland. And both venues have become top sites to host community events. In total, nearly 6-million people have visited these venues.

O-pa's annual economic impact is $48 million, and when Steelhouse Omaha opens May 12, 2023, that impact will grow to $61 million. Joan leads the O-pa Campus Expansion Plan which includes the phase I construction of Steelhouse Omaha and will include the upcoming phase II Center for Arts Engagement. She also manages the Holland Performing Arts Center and the Orpheum Theater where the organization has invested significant resources into both venues over the past 20 years.

Although Joan has been the driving force behind these signature venues that pour millions of dollars into the local economy, her impact is even more profound through realization of her vision of making the arts accessible to everyone. Hundreds of thousands of people have benefited from her commitment to bringing the highest level of performing artists to Nebraska, while breaking down barriers to see them. 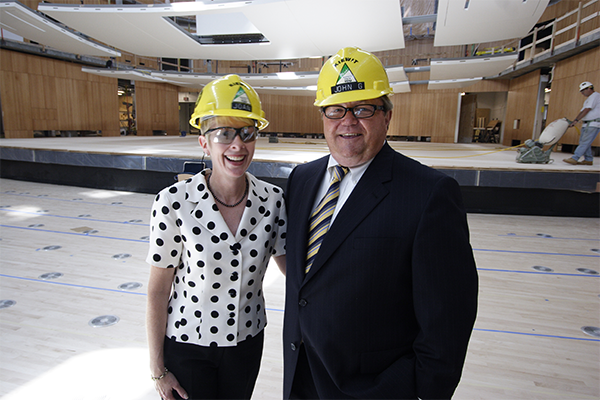 “Joan has a passion for this city,” says Ananias “Markey” Montague of Salem Baptist Church. “It's really obvious in the work that she has done. We're seeing more people come out and engage in events. I've lived in other cities and what we are doing in the city of Omaha, Nebraska, is not a common thing. Her heart is really in this great city.”


Opening doors for students across Nebraska

Joan’s passion for performing arts education and community engagement has opened doors for hundreds of thousands of Nebraska students statewide. For example, the O-pa based “Nebraska High School Theater Academy” in partnership with the Broadway League is now one of the largest such programs in the country, extending from Omaha to Scottsbluff, and building a bridge to Broadway for 9,000 students in over 80 schools every year. Joan’s vision of creating a realistic pathway for Nebraska students who want to pursue theatre has led to professional careers for many, and Joan positions herself as a “forever” resource for these young professionals and supports them with connections and advice. She has also developed national partnerships to bring other education opportunities to the region including Carnegie Hall Musical Explorers, Disney Musicals in Schools, and more. 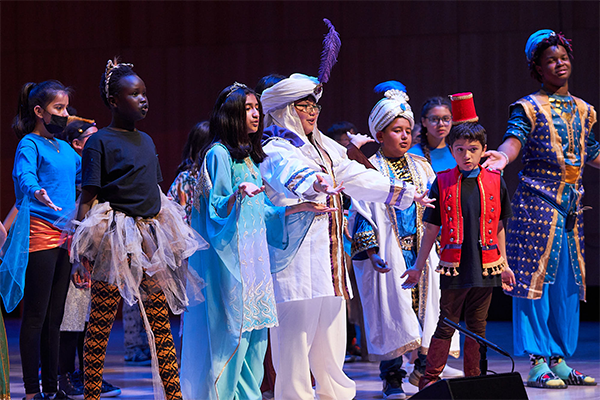 “It's in many ways kind of unheard of what she's been able to accomplish,” says Suzanne Wise of the Nebraska Arts Council. “It goes across the entire state. The impact of having a highly professional arts organization reach out in such a sincere and in-depth way to Nebraskans that don't live in proximity to Omaha. You can't put a price tag on that.”

Her commitment to diversity and inclusion has established O-pa as a national model for the organization’s work both internally and externally. O-pa has developed collaborative relationships with community partners such as Salem Baptist Church and 75-North and delivers free neighborhood events beyond its venues like Music at Miller Park, Summer Sounds at Highlander and Jazz on the Green at Turner Park. The Voices AMPLIFIED! series focused on the arts and social justice continues to grow – celebrating artists from diverse cultures and connecting the Omaha community with opportunities for discussion, reflection, and new experiences.

Joan’s influence goes far beyond Nebraska. As an Executive Committee and Board of Governors member of the Broadway League as well as Nebraska’s only Tony Awards™ voter, Joan is a well-respected and well-known ambassador for Omaha on the national stage. Her efforts have established our city as a regular touring stop for Broadway’s most exciting and in-demand productions. She has been active in other national organizations, and both Omaha and O-pa are recognized for the quality of performances, venues, and programs. Throughout her tenure, Joan has transformed Omaha and enhanced the quality of life in the community.

“I’m so proud of all the lives touched by O-pa: artists, students, community members, staff, audiences, donors, and volunteers,” says Joan. “What we’re able to do is a reflection of the extraordinary support we receive from this community, our donors and patrons, and from our Board of Directors. We still have exciting things to accomplish and much more to do! These experiences we provide through the performing arts make a difference. That’s why I am so very grateful to be here and to be part of this community.”

We congratulate Joan on 20 incredible years in Omaha and look forward to the next years to come!