Omaha jazz fans looking for something new are in luck — Paa Kow is a performance unlike any other in this year’s Jazz on the Green at Midtown Crossing lineup.

Described as “Ghana’s most artistic drummer” by Modern Ghana newspaper, he strives to bridge the gap between genres. Accompanied by his Afro-Fusion orchestra, Paa Kow is performing at Midtown Crossing on July 25. Here are a few fun facts about this artist.

1. Humble beginnings
Paa Kow is from the small Ghanaian village of Enyan Denkyira. Electricity didn’t arrive there until he was 13 years old, but that didn’t stop him from discovering his passion for music. Using homemade drums, a young Paa Kow quickly became a local favorite for his musical talent and energy. He even earned the regional nickname “small-boy drummer” due to his growing popularity. 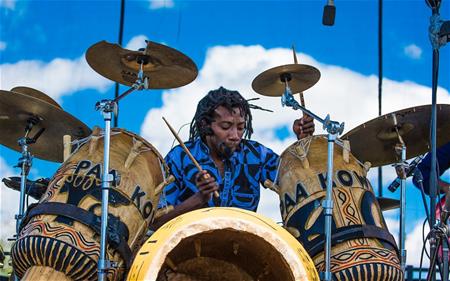 2. A brand new sound
His sound is no accident. Paa Kow developed his current Afro-Fusion style by bringing traditional Ghana influences and jazz together. The style became fully realized while working with musicians from America. This cultural experience arose in 2007 when he was offered the opportunity to be guest artist and teacher at the University of Colorado.


3. International exposure
Omaha is another city Paa Kow can add to the long list of places he’s performed. Since gaining popularity in Ghana as a young performer, Paa Kow has performed in cities across Africa, Europe, and America. He describes the international experience as a key component in the development of his musical style.