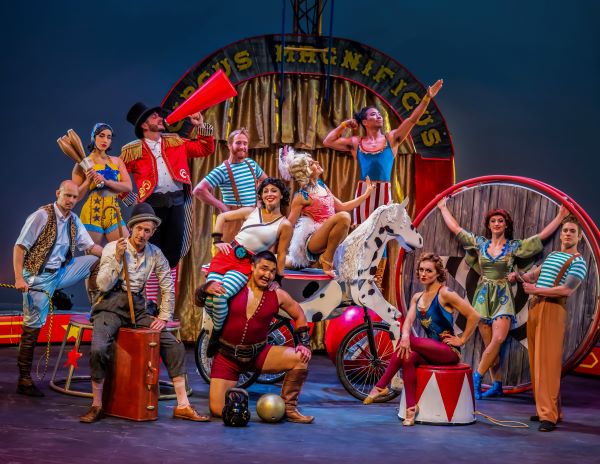 Acrobatics, aeralists and a bit of clowning around – Cirque Mechanics 42FT – A Menagerie of Mechanical Marvels will transport you to a dazzling 1930s one-ring circus. Get to know this innovative show before they swing into the Orpheum next week.

1. 42FT gets its name from Philip Astley’s circus.

42ft in diameter has been the measure of the circus ring for 250 years. Philip Astley discovered that horses galloping inside this ring provide the ideal platform for acrobatic feats. These equestrian acrobatics, along with clowns and flyers, are a large part of what we’ve all come to know as the circus.

2. Some aspects of the show are modeled after Charlie Chaplin.

The comedic interactions between some of the characters in 42FT and the performance machines and props were modeled after the famed scenes of Chaplin’s “Tramp” character in the 1929 silent classic “The Circus.” Chaplin is famously known for his exaggerated facial expressions, loose fitting clothes and miming.

From the Russian swing and trapeze to the ladder, slack wire and juggling - Cirque Mechanics has assembled a wide range of astonishing acts worthy of the ring. And that’s not all! The stunning production features a captivating performer riding on a life-like mechanical horse which pays homage the galloping horse from Astley’s circus.

For the acrobats, performing extraordinary feats requires an understanding of basic principles of physics including inertia and momentum. The contraptions in 42FT are based on simple machines (such as the lever, wedge, inclined plane and pulley) that rely on the same principles to help acrobats fight against gravity.


Now that you know all you need to know about Cirque Mechanics 42FT, be sure to snag seats to their high-flying show January 21.