Starting in Spring 2022, teachers can request FREE in-school workshops led by O-pa Teaching Artist, Shawn Bell. These clinics will cover a variety of topics relevant to Jazz performance and education (e.g. improvisation, learning through listening, style). The focus of each clinic will be tailored to the needs/interests of each school.

Register now to bring a workshop to your school!

This spring, ensemble will provide seventh and eighth grade students from across the metro area the opportunity to perform Jazz in a small group setting where improvisation, playing together as a band, and learning through listening are the primary concepts. The ensemble will receive weekly coaching by Teaching Artist, Shawn Bell and will perform a final concert to showcase the work they have done over the semester.

We're offering free and flexible, online jazz curriculum for middle and high school students consisting of 3 pre-recorded lessons for each instrument led by local jazz artists.  Each 15-minute video lesson focuses on a core jazz instrument and includes worksheets, listening examples and other resources. Teachers or students can register to receive access to the videos and resources they are interested in. 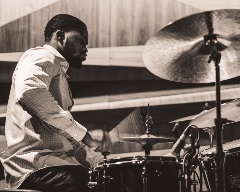 David Hawkins is an up and coming drummer, originally from Omaha, Nebraska. He began seriously pursuing music through the study of jazz, which in turn, has led him to tour, record and perform with a variety of different artists across many genres of music.

Jennifer Novak Haar is a versatile pianist throughout the United States. She performs in many jazz combos ranging from duo to big band including her own group, Novak & Haar, and she was invited to perform as a jazz pianist at the Kulturnacht festival in Braunschweig, Germany. She studied jazz improvisation with Gary Burton and is working towards a professional certificate through Berklee’s online program, and she also studies Charlie Banacos courses with pianist Garry Dial.

Jennifer frequently performs with the Omaha Symphony, the Omaha Chamber Music Society, and for other professional organizations in the area.  She is a music director and keyboardist for local theater and has played for numerous Broadway touring productions. She toured nationally with Mannheim Steamroller and the Irish group Fír. Jennifer graduated from the Oberlin Conservatory of Music and was a Fulbright scholar at the Hochschule für Musik in Würzburg, Germany.  She is married to bassist Mark Haar.

Christopher Leach is a trombonist, pianist, and educator based in Lincoln, NE. He has travelled the country and world playing at venues and festivals large and small, and performing educational jazz clinics at both the high school and college level. 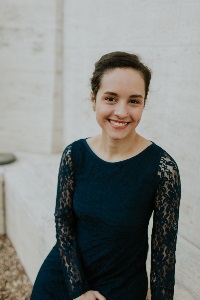 Native of Argentina, Florencia Zuloaga is a versatile performer with over a decade of professional performing and teaching experience. She has appeared as a soloist, alongside chamber groups, and with orchestras in her native country and in the United States. An enthusiastic explorer of diversity through concert programming, Florencia made recent performances of repertoire written by Argentinean women composers, including the 2020 USA premiere of the Piano Sonata by Lita Spena, as well as in events such as the National Conference of Keyboard Pedagogy (USA, 2021) and the Segundo Congreso Internacional de Piano (Argentina, 2014).
Florencia is currently pursuing a Doctorate in Musical Arts at the University of Nebraska Lincoln with an emphasis on Piano Performance and with the guidance of pianist Paul Barnes. At the Glenn Korff School of Music, Florencia serves as a Graduate Teaching Assistant, Othmer Fellow, and was recently selected as the 2020/2021 Glenn Korff Distinguished Artist and Scholar. Florencia completed a Masters in Piano Performance in the University of Arkansas, where she studied with acclaimed pianist Jura Margulis, and a Graduate Certificate under the guidance of Dr. Tomoko Kashiwagi. While studying in Arkansas, she served as Graduate Teaching Assistant and was awarded the Carolyn Hickson 2019 Piano Scholarship. Additionally, she received the First Prize in the 2018 Concerto Competition, performing Maurice Ravel’s Piano “Concerto in G” with the Arkansas Philharmonic Orchestra. Florencia was also finalist for the 2019 edition of Northwest Arkansas “Artist 360” program. As a member of the Jazz Combo at the University of Arkansas, she toured across the state and performed at the 2019 Network Jazz Conference in Reno, Nevada.
Being a laureate in multiple piano competitions in her home country, Florencia has performed extensively in Argentina. Some of her accolades include first prizes from the Asociación Argentina de Pianistas Pedagogos (member of the European Piano Teachers Association), Temporada Alegretto and Buenos Aires City’s Youth Orchestras. Her orchestral debut in 2012 featured a performance of Mozart’s Piano Concerto No. 9 with the Amadeus Radio Orchestra in Buenos Aires. Florencia graduated with honors from the Manuel de Falla Music Conservatory in Buenos Aires and holds a Bachelor of Music in Piano Performance from the National University of Arts. Her piano teachers include Marcela Fiorillo, Eduardo Páez, and Alfredo Corral. 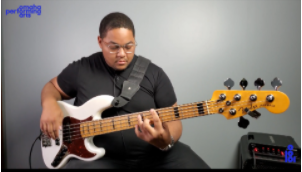 Join Jacob Sorensen as students will learn about the basic concepts of Jazz and the Electric Bass. 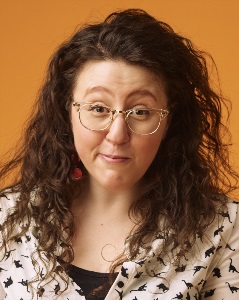 Paige Nola is a professional actor, bassist, and fiber artist. A UNO grad, she plays for many theaters in Omaha. She performs with her jazz group The Benson House Trio as well as Esencia Latina, a 14-piece salsa band. She is also the director of Millard North’s show choir band.

On stage, Nola most recently portrayed a Holocaust survivor in When We Go Away at the JCC. She is also a company actor in the ongoing international show, The Dinner Detective, and with the education theater company, RESPECT, where she has also lent her skills in sound design and music.

Nola studied at the New York Conservatory of Dramatic Arts and fell in love with film acting. She is very active in the local film scene and can be seen in A Day with Lily (2021), Bricking and Entering (2022), and Inner Worlds (web series - 2022).

Nola loves crafting, all things chocolate, a good pen, training her dogs, dinosaurs, and laughing with her love. 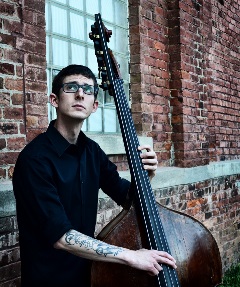 A native of Manhattan, KS, Bobby Scharmann is a stylistically diverse bassist and educator with experience in a wide range of genres. He currently performs in the bass section of Omaha Symphony, and is assistant principal bass in Lincoln Symphony. His festival appearances include the Aspen Music Festival and the National Repertory Orchestra.
In addition to his orchestral career, Bobby has performed jazz, rock, and pop throughout the United States, appearing at such venues as The Jazz Kitchen in Indianapolis, as well as Jazz at Lincoln Center in New York City. He received two awards from Downbeat Magazine’s Student Music Awards in 2015 for work with his co-led jazz septet JKS. The septet released their debut album “Moonflower” later that year. Bobby was also invited to Ravinia’s Steans Institute Program for Jazz in 2014, where he studied with faculty Dr. David Baker, Rufus Reid, Curtis Fuller and Dr. Nathan Davis. 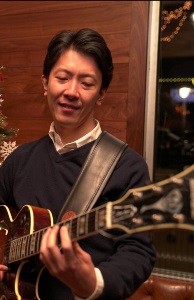 Tetsuya Nishiyama is a guitarist, originally from Nagoya, Japan. He has worked with some of finest jazz musicians in the U.S including Marquis Hill, Reginald Thomas, Geoffrey Bradfield, Greg Ward, Ari Brown, Robert Irving III, Tony Monaco, Bobby Floyed, Victor Garcia, and many others. He has also worked with many names on the blues R&B scene including Buddy Guy, Roy Ayers, The Emotions, Toronzo Cannon, Mike Wheeler, etc

With degrees in Jazz Studies from Western Michigan University and Northern Illinois University, teaching artist Shawn Bell will bring his deep knowledge to students – equipping them with new skills and inspiring our region’s next generation of jazz musicians. 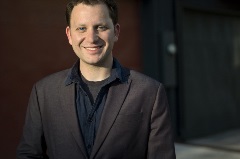 Greg Simon is a composer and jazz trumpeter from California, by way of Oregon and Colorado. His works have been performed by ensembles and performers around the country, including the Nu Deco Ensemble, the Cavell Trio, Alarm Will Sound, the Fifth House Ensemble, and the Playground Ensemble of Denver. He has won the NACUSA Young Composers’ Competition, the Brehm Prize in Choral Composition from the University of Michigan, and the POLYPHONOS competition from the Esoterics. Greg studied jazz improvisation and composition with Bill Lucas, Ellen Rowe, and Brad Goode, and is an active freelancer in the Omaha-Lincoln area. 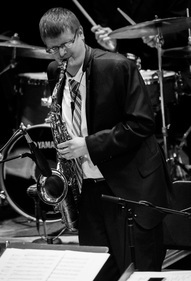 Dr. Andrew Janak is an active saxophonist/composer/arranger/educator currently based out of Lincoln, NE after previously spending several years in Chicago, IL. 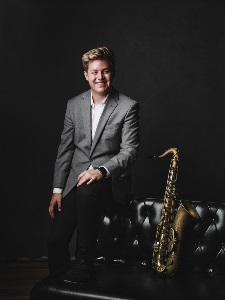 Skye Junginger is a saxophonist, composer, arranger, teacher, and Omaha-native with a Master of Music in Jazz Studies degree from the University of Illinois Urbana-Champaign. Skye has toured the world playing music in Japan, China, South Korea, Lithuania, Latvia, and the Czech Republic. He has also backed up artists such as Conor Oberst, Nate Walcott, Chris Potter, Donny McCaslin, and more. Skye has also played for the 44th President of the United States, Barack Obama. He now fronts and organizes his Electric RNB/Soul group, Midwest Coast, here in Omaha.

Free Digital Jazz Lessons with Jazz Academy Teaching Artist, Shawn Bell. These short lessons will help students of all ages learn about the different concepts behind jazz improvisation. Feel free to share the lesson with other students and families as well! 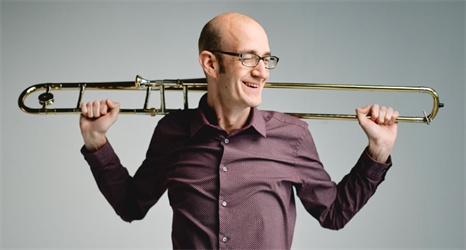 Trombonist Shawn Bell studied music and has traveled the world as a jazz musician. For the last decade, he's been working as an in-demand educator to inspire the next generation of jazz artists. Along with private training for students of all levels, he's taught large and small ensembles at Northern Illinois University and Lansing Community College.

Any student participating in an O-pa Education event must complete the Participant Release Form below. Students are only required to submit one release form for the 2021/2022 season.