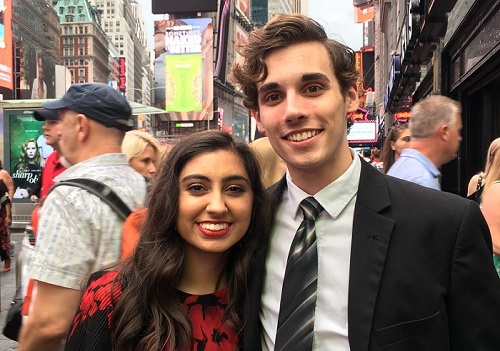 This year's national nominees were certainly outstanding! Sierra Lancaster from Millard North High School and Nathan Bonsall from Kearney High School outperformed more than 50 students from across Nebraska for the opportunity to spend a week learning from Broadway professionals and rehearsing for the Jimmy Awards ceremony.

I recently caught up with Sierra and Nathan for a Q&A to hear about their experiences in NYC, their love of theater and what's next. 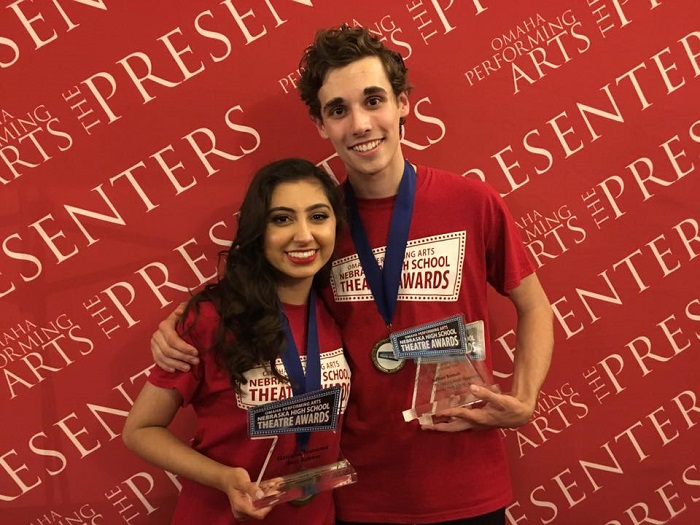 NHSTA national nominees Sierra, left, and Nathan, right with their awards after the Showcase on June 8.

Q: Why do you love theater?
Sierra: I fell in love with theater when I was 12 years old, after participating in Omaha Public Schools’ summer production, Les Misèrables. …The line, “To love another person is to see the face of God” is what really captured me, because I understood that theater is about bringing love and joy to others, and spreading empathy.

Nathan: I love telling a story and connecting with an audience's energy; it's such a huge adrenaline rush. I think being a theatre artist and displaying your passion is especially important in our current political climate.


Q: How did you become involved in the Nebraska High School Theater Academy?
Sierra: I became involved in NHSTA through my high school! Every year our fall musical is adjudicated, however, this was my first year attending the Showcase and getting to be a part of it. I had done summer shows every summer in the past, so I hadn’t been able to be a part of NHSTA. … When the opportunity arose for me to be in this year’s Showcase, I jumped at the chance (and I’m very happy I did)!

Nathan: My high school joined the program right at the end of my junior year and right after we joined, I got asked to perform at a master class with Rob McClure where he taught audition technique. It was such an amazing experience, getting to train with a Broadway star and receiving feedback on my performance.


Q: What inspired you to audition for nationals?
Sierra: A few years ago, I watched the PBS documentary about the Jimmy Awards, “Broadway or Bust.” Since then, I very much wanted to go to (nationals) in New York City. Of course, there were the obvious perks – getting to perform on a Broadway stage, getting to work with and meet Broadway professionals, and getting to go to the “greatest city in the world!" But there were other reasons, as well. I wanted to improve as an artist. I wanted to collaborate with other bright minds who had a similar passion.

Nathan: The Jimmy Awards are truly the pinnacle of high school musical theater. It's been my dream to perform on a Broadway stage ever since I was a kid, so there was no doubt in my mind that I needed to audition. 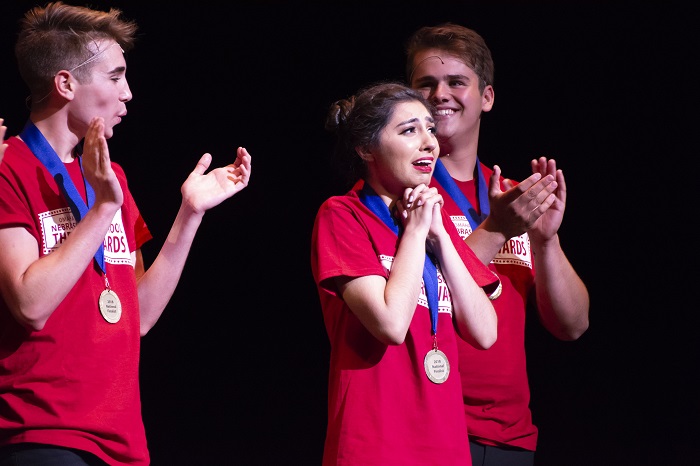 The moment Sierra is announced as a national nominee at the 2018 Nebraska High School Theater Academy Showcase on June 8 at the Orpheum Theater.

Q: How did you feel when you found out you had been selected as a national nominee?
Sierra: When the announcement was made (at the Showcase), I felt so many things at once – joy, gratitude, excitement. I wanted to cry and laugh and jump up and down, all at the same time! It was truly one of the best moments of my life.

Nathan: Overwhelmed. This was something that I had been working toward for such a long time and I had been wanting it so bad; when it finally happened, it felt like a huge dream come true. I can't express how honored and excited I felt in that moment. 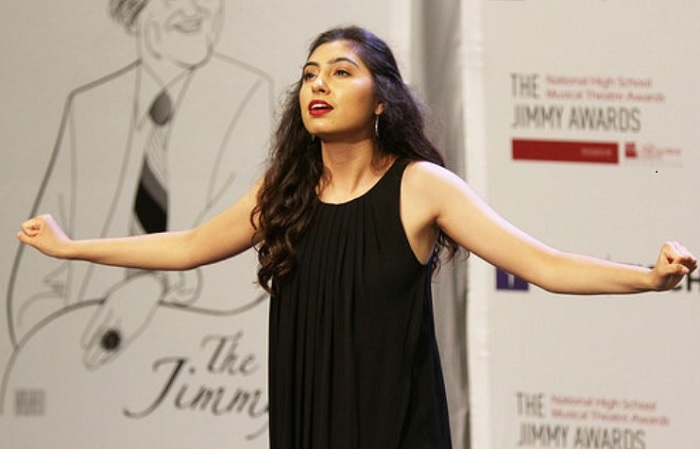 Sierra during rehearsals before the Jimmy Awards.

Q: What was the Jimmy Awards like?
Sierra: The Jimmy Awards was mind-blowing. I kept having to pinch myself! I made so many friends and worked with such talented artists. I’m so grateful to the Nederlander Organization, the Pittsburgh CLO and the Broadway League for giving the other 79 nominees and myself this wonderful opportunity!

Nathan: The Jimmy Awards were absolutely electrifying, exceeding all of my (very high) expectations. It was so inspiring and refreshing to work with other students that had equally as much passion as I did. We were all treated like stars throughout the week and it was so rewarding to see all of our hard work pay off. 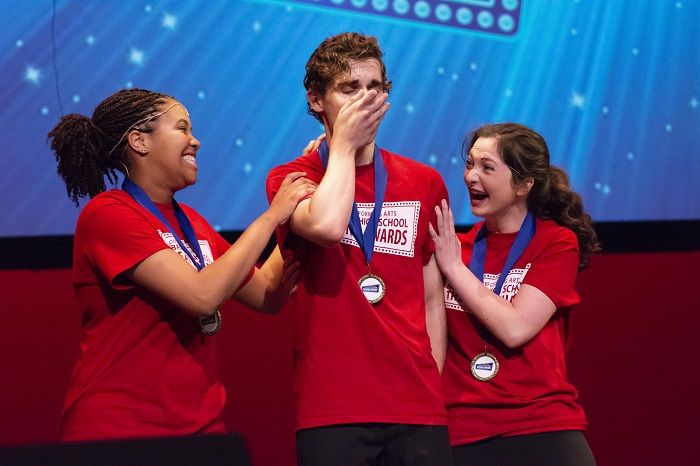 The moment Nathan finds out he's been selected as a 2018 national nominee.

Q: What’s the most important thing you learned in NYC?
Sierra: I learned not to compare myself to others. That’s something that you’re always told, but truly, you can’t… As I continue into college and beyond, this is an important lesson that I will keep with me.

Nathan: Stay in your lane. Everyone is on their own personal journey as an artist so don't worry about comparing yourself to other people, and instead focus on making yourself the best that you can possibly be.

Q: What are your plans for the future?
Sierra: I’ll be attending Boston Conservatory at Berklee this fall to pursue a Bachelor of Fine Arts in Musical Theater. I’m so excited! I can’t wait to go to school and grow as an artist and as a person. After college, I would love to move to New York and start auditioning, but we’ll see where life takes me. Whatever happens, I have faith that I’ll go where I’m meant to be.

Nathan: I will be starting my college journey in the fall at Millikin University. I am going to be studying musical theater and I will be getting a Bachelor of Fine Arts. After college, I plan on moving to New York City to pursue a life in the performance industry. I will be acting, singing and dancing for the rest of my life, no questions about it. 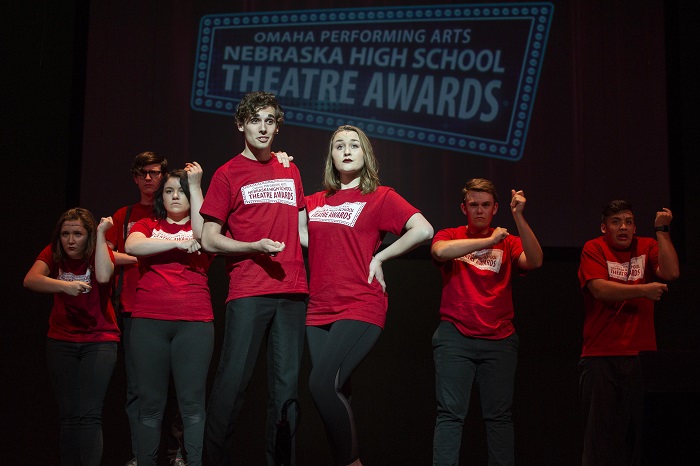 Nathan performs with the cast of his school's musical, The Addams Family, at the Orpheum Theater in the 2018 NHSTA Showcase.

Watch highlights from the 2018 NHSTA Showcase at the Orpheum Theater, including Nathan and Sierra's solo performances.

Learn more about the Nebraska High School Theater Academy on our website.