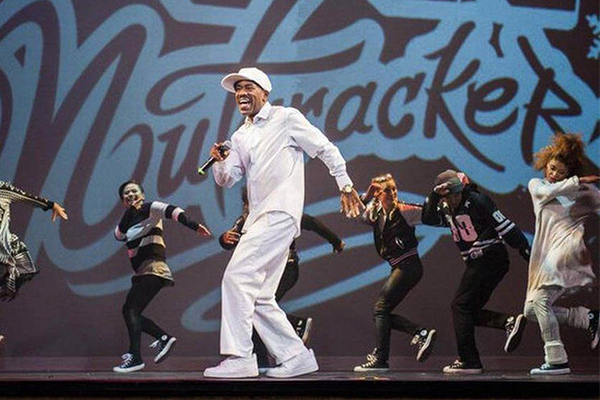 Author's note: This article originally appeared in The Omaha Star.

If you tried to sculpt the model for a legendary hip-hop artist with skill, charisma, good looks and street credibility, your result would be something close to Kurtis Blow. In 1979, when he was just 20 years old, Blow became the first rapper signed by a major label. Today, he is revered as one of the founders and creators of recorded rap.

He released "Christmas Rappin'"which became an instant classic and led to the recording of “The Breaks,” igniting a rap trend and new art form. Blow then released 10 albums over 11 years. Tracks like “Party Time” introduced the fusion of rap and go-go. Hit songs like "8 Million Stories," "AJ Scratch" and "Basketball" still get spins by DJs today. After a four-decades long career, Blow continues to make his mark in the industry.

Omaha can experience the talent of this legendary artist in The Hip Hop Nutcracker playing at the Orpheum Theater on Sunday, November 28, 2021, at 2 PM, which recently won a New York Emmy Award for Long Form Content. In a Q & A below, Blow talks about his legacy, a recent health battle and his latest production.

O-pa: You recently had a heart transplant. How has that changed your life?

Blow: I am blessed and a receiver of a miracle. I received a 34-year-old heart, and I am elated, overjoyed, grateful to the UCLA hospital (incredible place), my wife of 38 years praying for me throughout the whole ordeal and all my friends and family. It worked you know. God is still in the miracle business. I am fortunate and blessed to be able to still do what I do.

O-pa: How would you describe The Hip Hop Nutcracker to our readers/listeners?

Blow: The Hip Hop Nutcracker is a modernized version of the classical Tchaikovsky piece that came out in the 19th century. Basically, we have the same characters. We have The Nutcracker, Maria Clara, Drosselmeyer, Mouse King -- and it's incredible. It's an amazing dance holiday extravaganza, and we have so much for the whole family. The story is basically about two people falling in love, and the love creates a special magic that can defeat evil. “Love conquers all” is our theme, and we have a DJ spinning beats, hip-hop funky beats. We have our very own hip hop musician, a violinist Jarvis who comes out and plays his violin. I am the host and MC. So, I come out first and take everybody back to the old school before the presentation starts.

O-pa: How is this show different than other Nutcracker shows?

Blow: The Hip Hop Nutcracker features the greatest dancers from around the world, and I call them the b-boy dream team, and they are an awesome, incredible group of young people out there doing their thing, and they have mad flavor with mad styles. You’ll see everything from pop-locking to electric boogie to the power moves with the head spin and the windmills and 1990s and even ballet is represented.

O-pa: You are coming up on 4 decades in hip hop – did you ever imagine working on a theatrical show like Hip Hop Nutcracker?

Blow: No, not really, but I always consider myself as an entertainer. When I get the opportunities to branch out into the genres of entertainment other than hip hop, I jump on it all the time. You see the thing that I learned in college is to take the culture in the classroom and the classroom into the culture. So, I studied music and communications, and I found that rappers are like public speakers, you know, and so I took that ideology about communications and being an orator and I used that in the field of entertainment. I've always tried to fuse different forms of music into hip hop. That's what we're doing here today, 40 years later, we’re fusing the music of Tchaikovsky's incredible classical Orchestra with hip hop beats.

Blow: Classical music is the basis for music. When I was at a high school of music in the arts learning about music theory, this is how you learned to read and write music. When you are studying classical music, that is the example given by the teachers to teach you about music. You have all your sections, your woodwinds, brass, strings, percussion, and this is the basis of music in general. When it comes to hip hop, hip hop is the funky beat and when you fuse the two together, they go hand in hand.

O-pa: What advice do you have for young people who want to go into entertainment?

Blow: Oh, I say this all the time as advice and not just entertainment, but it's for anything that anyone wants to do with their life. If you have aspirations and dreams of making it in whatever, doctor, lawyer businessman, rapper, singer, break dancer, I tell you this: study, study, study, research, research, research. Study the history of that subject of that field and then within that history find the couple of people who were successful, and you repeat the steps that they took to achieve this success and you too should achieve success as well.

The Hip Hop Nutcracker will travel to 31 cities starting in November through January and will make a stop at the Orpheum Theater on Sunday, November 28 at 2 PM. Tickets can be purchased at TicketOmaha.com or by calling 402.345.0606.

Before the show on November 28, Aaron Derell Gregory, an educator, choreographer, and dancer, will choreograph an audience interactive performance that will take place in the lobby at the Orpheum one hour before the event. This short performance will merge all things Nutcracker with hip hop movement and some character play.

Learn more about the show.