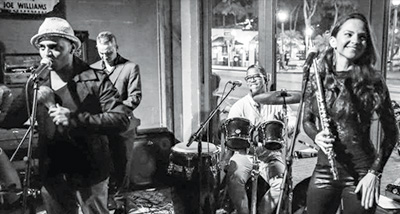 “So hot and danceable that even when you talk about the group,
you find yourself moving your hips.”
- Richmond Times Dispatch

Equally at home in concert halls, jazz clubs, festival stages and dance venues, Tiempo Libre is celebrated for its sophisticated tropical music featuring an exhilarating mix of jazz harmonies and seductive rhythms. Each concert is a party and celebration of their Cuban roots and culture.

Throughout the past 14 years, the band has appeared around the globe and has been featured on television shows including “The Tonight Show,” “Live from Lincoln Center” and “Dancing with the Stars” as well as many entertainment programs on Univision and Telemundo. Since the group’s formation in Miami 2001, its members have been on a mission to share their Afro-Caribbean heritage with as wide an audience as possible, reinterpreting and reinvigorating music born from the meeting of their musical origins with their new American experience.


All Jazz on the Green at Midtown Crossing concerts are free to the public, with no reservations or tickets needed. Seating in the grassy circular area of Turner Park with a direct view of the stage, is permitted at 5:00 PM. Green spaces outside the bowl will be available before 5:00 PM. Pre-show entertainment begins at 6:30 PM and the headlining performance starts at 7:30 PM.

The lead sponsor for Omaha Performing Arts presents Jazz on the Green at Midtown Crossing is Mutual of Omaha. Media sponsors for this year’s series are KETV, KIOS and Omaha World-Herald. Omaha Steaks is a sponsor of this performance. For more information about the series and the artists, visit JazzOnTheGreenOmaha.com.

Mutual of Omaha will have its surface parking lots open to the public for free beginning at 5 PM. Mutual of Omaha’s surface lots are located at 36th and Dodge streets; between 35th Avenue and 34th Street off of Dodge; and at 35th and Farnam streets.
Metered parking is also available on the street.