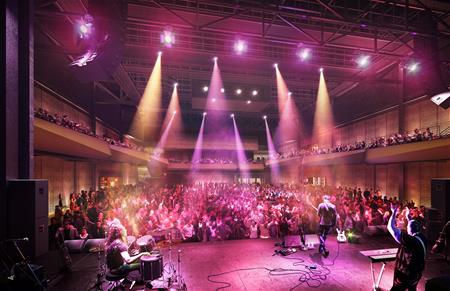 Omaha Performing Arts announced plans to expand its campus, pending funding, by constructing a Live Music Venue, which will be located from Dodge Street to Capitol Avenue between 11th and 12th streets.  Months of study by the board and senior management identified a performing arts gap for groups who are currently by-passing Omaha because of the lack of a downtown music venue to accommodate their audiences.  Fundraising is underway to cover the costs of the $109 million facility, with a goal of opening in early 2023.

“There are a number of up and coming bands, solo performers and artists who are not making a tour stop in Omaha because of the lack of a music venue to meet their unique needs,” said O-pa President Joan Squires. “We believe the Live Music Venue will significantly improve music opportunities available in Omaha, especially for the key audience demographic of 21 to 45 years old. This proposed O-pa campus expansion provides an excellent fit with the renovations underway along the Riverfront, and will further enhance Omaha’s downtown entryway.”

Omaha Performing Arts is known for its world-class facilities, performances by artists and ensembles of the highest quality and education and community engagement programs that reach a wide variety of community members. The addition of this venue will play a major role in expanding its offerings, providing a unique, flexible space for local performing arts organizations to develop new works and a space to host touring bands and concerts.

O-pa is working on the design of the Live Music Venue with Ennead Architects (formerly Polshek Partnership), original designers of the Holland Center, and Holland Basham Architects of Omaha. The flexible venue will serve a standing audience of 1,500 to 3,000, and feature touring performers who connect with the next generation of audiences. The facility will also enable local arts organizations to create and perform in a flexible venue.

In addition to enhancing entertainment options in the Omaha area, the Live Music Venue will help activate several major downtown development projects, including the current renovations along the Riverfront. The new facility will provide more entertainment opportunities for young professionals, furthering quality of life, workforce development and retention efforts in Omaha. Project plans were developed after interviews with local organizations, community leaders and elected officials, combined with research about similar venues around the country.

“The Live Music Venue will strengthen Omaha’s image as a premier artist and entertainment center and make us even more attractive to young adults,” Mayor Jean Stothert said. “This is an exciting project that has the potential to generate significant economic activity and bring many thousands of music fans to downtown Omaha."

The project will be contingent upon successful fundraising which is in progress.  After all funding is committed, construction will begin in the fall of 2020 and the Live Music Venue will open in early 2023.

The O-pa campus expansion is centered around the Holland Performing Arts Center, and the second phase will include an education center on a portion of the green space east of the Holland Center to support O-pa’s growing education and community engagement programs. No timeline or plans have been set for Phase II.

“The addition of this music venue and its flexibility will also provide new opportunities for local artists and arts organizations,” O-pa Board Chairman John Gottschalk said.  “Our board and leadership team is dedicated to providing vibrant arts and entertainment experiences in Omaha and the region.  We have held initial conversations with our arts partners and local organizations and are excited about what this could mean to the future of our community.”